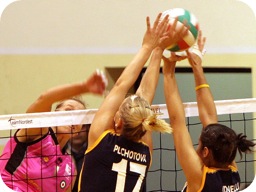 One major challenge with the failing global financial markets is that the amygdala is directly connected to the economic system. This means that individual feelings of billions of people around the globe is directly linked to the global economy. To some extent this have of course been true for a long time, but the increasing speed due to more online transactions i e removal of buffering mechanisms, makes the connection even tighter for every day.

Once upon a time I played volleyball, a sport which I sadly retired from after I had a bit of surgery in my shoulder. I really liked volleyball because of the magic that occured when playing. Volleyball is an explosive and intense sport where all team members have to connect to each other – have flow – to play really good. To achieve this volleyball players repeatedly talk to each other and touch each other in order to create bonds that connect the bodies and minds of each other. When you feel you are connected you don’t think consciously about where the other players are positioned, you simply know where they are and where you should be. It is an almost magic sensation and the team seems to behave like one organism.

After some time of flow, the opponents might be catching up and play better and you lose a couple of points. Suddenly you feel like if you’ve lost all the flow and your team seems to have a problem performing as a team. You start losing even more points and it feels like nothing is working anymore.

The key question here is what you do to recreate your flow again?

The wisdom from tight team sports like volleyball is that you cannot recreate it with less than forcing the whole system to completely disconnect, wait for a while, and then restart the whole process of connecting again – not creating exactly the same connections – but starting to connect again in order to find the flow of the team. In volleyball it is called a timeout.

I would argue that since the economic system more and more behaves like a volleyball game – i e a tightly connected system of brains and bodies – and what it would need right now is a timeout.

Why would timeouts be better than bailouts? If we look at the economic system from a social psychology perspective, or even a complexity system perspective, changing a destructive spiral into a constructive one is extremely difficult. The reason is that all the small reinforcing drivers are working in concert in order to maintain the direction of the system. And it will continue until the energy runs out or something at a very basic level is turning some of the fundamental drivers in another direction e g a positive spiral. This is basically the reason why many billion of dollars of aid to the third world didn’t change anything. It is first when a number of internal key forces, albeit very tiny-looking, are starting to positively reinforce each other the economic development turns into an upward spiral. To be able to reinforce these small, but important drivers within our economy, we have to be extremely clever to reinforce the right ones, without also fueling the destructive ones.

So why not try the timeout idea? If we don’t, the system will crash anyway in order to create it’s own natural timeout, and we will take the full hit. If we on the other hand create an artificial timeout and forces ourselves to rewiring the system in a new way, the we maybe have found a heuristic to stop these kinds of globally reinforces crises?