My home town Göteborg is currently host for the 61st World Newspaper Congress & 15th World Editors Forum with the main theme: Newspapers: A Multi-Media, Growth Business. To me, who is working with strategy, technology related forecasting and scenario planning, it feels really weird. When I look at how technology development and diffusion mix with new emerging values and behavior I see a world where a large part of the population globally is constantly involved in a peer-to-peer information sharing process. Of course there are hubs of information gathering and spreading here and there, but they are not stable enough to build a static and hierarchic business model around.

We will of course see a myriad of floating dynamic businesses who is born and then dies, shrinks and grow. All with a pace of the changing interests and new possibilities. But not anything like today’s media factories… That model basically died in 1995, when the new web technology boosted the new business models of either

When reading in today’s local paper about the congress I was reminded of something Peter Schwartz and Paul Saffo were saying in a discussion in Davos in January 2008. I searched my hard drive to find it and then I found a link to an article describing it – “A Futurist Panel At The World Economic Forum Suggests Print Newspapers Will Cease By 2014 So Should We Start Packing Our Bags?”. But didn’t get the article, because I was stopped by a page looking like this: 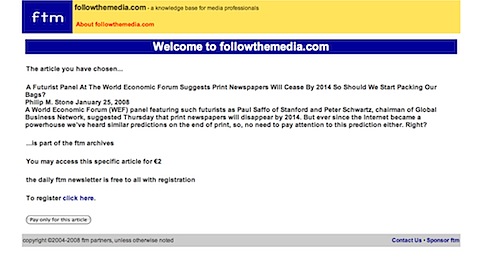 I had apparently been choosing a link which went through a commercial site in the media industry who behaves exactly the way that makes the media industry business logic irrelevant to the new emerging business models. I was suddenly required to pay 2â‚¬ to see the article… The problem here is that I that I am not willing to pay (or go through the hazzle of paying) for a short article which I don’t even know have any interesting content.

Since this example points the finger in the direction towards the death of the news based mass media factory in its current form it is not necessary to talk about the other levels of driving forces like: technology and the new emerging modern man changes the foundation of communications logic and make the broadcasting model irrelevant and soon extinct – at least the broadcasting business model – because in the new emerging world the value equation for anything with a distribution cost of close to zero is fundamentally changed.

When I think about these kinds of congresses I can’t help thinking about how it might have looked at a congress in the ice distribution industry when the electricity and refrigerators were spreading in the homes in the beginning of the last century. I wonder if those venues had themes like: “Ice distribution – a High Tech, Growth Business”?