I couldn’t agree more. My concern is that this isn’t understood in the IT community at all. But in order to try to change this I will here give you CIO:s and IT architects a tip.

Being a consulting scenario planner with a (too) long history in a big IT-department my basic method is to use scenario planning and add a simple cross matrix analysis in order to understand the business effects of the IT choices you have to make. 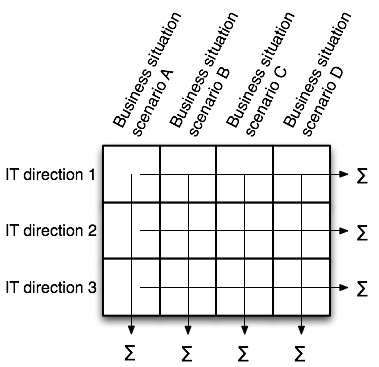 In practice this means that you

The trick here is to have good evaluation parameters as well as involving bot high level IT people with high level business people in the process. If you don’t give the participants too long time to dig down into (irrelevant) details you will have a (usually non-existent) strategic discussion about both IT and business at the same time.

One thought on “Scenario Planning – a necessary tool for the CIO”