Most observers of global political development would probably just nod at this. There definitely seems to be a pattern: Donald Trump, Vladimir Putin,  Xi Jinping, Recep Tayyip Erdogan and Victor Orbán to just mention the most obvious ones.

This graph from the article is showing the waves of democratization vs autocratization. 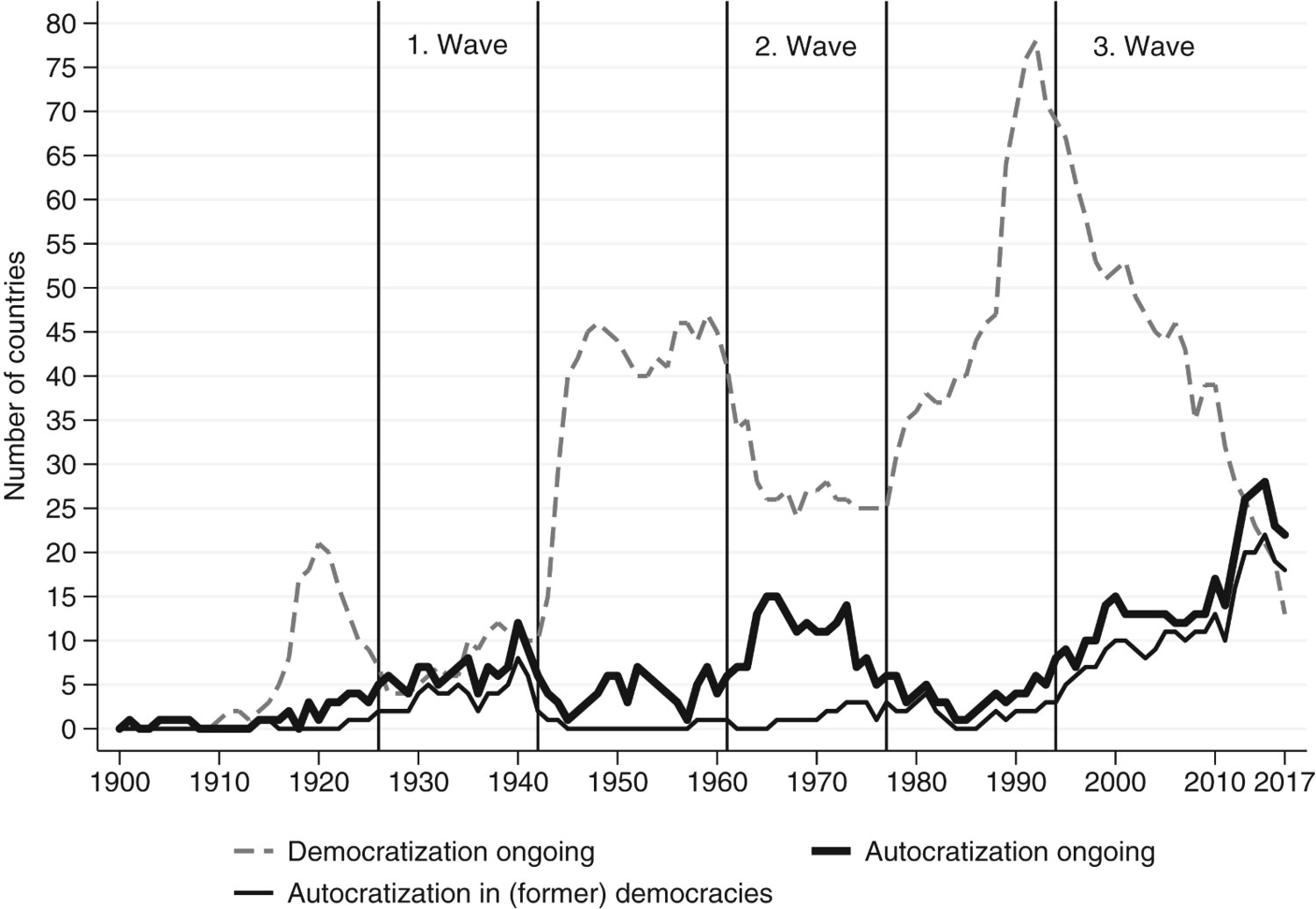 Ironically the current autocratization wave seems to have started around 1992, about the same time when Fukuyama proclaimed the End of History and the final victory for liberal democracy.

This time it is a slower and legal process

In comparison with earlier autocratization processes, this one is both slower and takes place within the boundaries of the law. It is more like democracies are slowly dissolving.

Is the slow speed and legality of current autocratization a good or a bad thing? On one hand, the speed might allow for democratic forces to organize and oppose it, which might either curb the development or at least dampen its effects. On the other hand, the slow and gradual development together with legal methods might avoid triggering any responses from the public at all. I can’t help thinking about slowly boiled frogs here.

By now, most regimes – even autocracies – hold some form of multiparty elections. Sudden and illegal moves to autocracy tend to provoke national and international opposition. The tests we present suggest that contemporary autocratizers have learned their lesson and thus now proceed in a much slower and much less noticeable way than their historical predecessors.

The history of liberal democracy isn’t very long but what does history so far tell us about what might happen the years to come?

[…] very few autocratization episodes starting in democracies have been stopped short of turning countries into autocracies.

For us who still believe in the ideas of liberal democracy, this is definitely a dangerous development.

One of several concurrent developments

But I must at least inject another perspective.

From my viewpoint as a futurist, autocratization is just one of several complex, intertwined and concurrent driving forces shaping the future. Accelerating technologies and digitalization are a couple of others. And so are demographic changes, changing values and socioeconomic development. As well as the complex and uncertain development of the global economy. And climate change… and so forth…

Maybe this development is the consequence of our doubt in democracy as the model of organization to meet the challenges of complexity and uncertainty mankind is up to now?

Could this be the beginning of the end of liberal democracy we are witnessing? Or is it just another challenge from which we will learn how to build a more robust version av democracy in the years to come?

Read the article at: A third wave of autocratization is here: what is new about it?

I am engaged in thinking about the future, how it emerges and how to approach it.