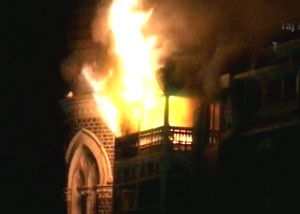 One major strength with humanity is that every time the current system is being threatened it is learning something. Some of us argue that we should be using our relatively recent develop pre-frontal cortex in order to foresee things, but at the same time we know that real collective learning emanate from real experiences which stirs op real emotions.

So what learning are we talking about in this sad situation?

First military and security groups around the world, including India, saw a new and horrifyingly effective tactic when a rather small number of individuals with ordinary weapons and explosives could terrorize one of the world’s major cities for hours after hours and kill hundreds of people. I shrug when I think about which consequences this lesson will have when it comes to new kinds of security measures being implemented in more places in our society.

For all the different small groups of terrorists, guerillas and organized criminals around the planet this was a lesson in the efficiency in the swarming tactics we have seen small examples of here and there. In my home town Göteborg organized criminals seems for some time been experimenting with placing fake bombs or committing crimes elsewhere in the city in order to divert the attention of the authorities. This successful attack in Mumbai will become a major lesson of the learning processes John Robb calls Open Source Terrorism in his blog Global Guerillas.

For the Internet crowd and the traditional media channels the learning this time was about the effectiveness of tweeting, or as Paul Saffo puts it: News no longer breaks – it Tweets. Every time the social media crowd is engaged in something, new structures are emerging when the social software tools are being used in a slightly different but more effective fashion. I first noticed the real large scale effect of this in the aftermath of the dreadful Christmas tsunami in 2004 when the citizen journalists in place with cameraphones connected to the blogosphere and actually made all the necessary analysis hours before any journalist arrived and days or week before some governments figured out how to do. At that time the tools were blogs and wikis and mobile cameras. In every crisis after that I have been noticing how the connected crowd quickly restarts the process, but every time on a bit higher and more sophisticated level. This time the tool of choice was Twitter and since Twitter is a much faster paced technology, the information flow was even faster than before which meant that the reports were almost instant. For the curious you can go to Twitter #Mumbai to follow the Twitter updates in real time.

What does this mean for the future? If we compare these three groups when it comes to the speed and potential of learning to act in this new emerging environment the picture becomes pretty clear. It is not the governments or the security professionals that will adapt best or more quickly, even if they control a lot of resources. Most likely they will intensify their already ongoing work of trying to identify and stop potential dangerous people. They will undoubtably make the life difficult for many citizens around the globe, but if they don’t redefine themselves and their mission to be much more bottom-up and preventive, they will not learn how to really cope with new emerging security situation.

The fastest learning is definitively taking place in the bottom-up part of the game where a race of mastering these new emerging technologies in a new emerging environment have been going on for some time. The question is not if the nation state will be able to handle terrorism but if the networked global citizen will develop a working distributed “defence system” in order to shield the society faster than what terrorists and other radical forces will develop their effective swarm tactics.

Update: John Robb have made a couple of interesting follow up posts about the Mumbai tactics:

Update 2: And guess what communication technology the terrorists were using?? Blackberrys of course!

Update 3: In NY Times February 14, 2009 John Arquilla commented on these kinds of attacks and called them Swarm tactics and characterized them as

The basic concept is that hitting several targets at once, even with just a few fighters at each site, can cause fits for elite counterterrorist forces that are often manpower-heavy, far away and organized to deal with only one crisis at a time.

and ends the article with a prediction:

Yes, the swarm will be heading our way, too. We need to get smaller, closer and quicker. The sooner the better.

I am engaged in thinking about the future, how it emerges and how to approach it.