Since I use this example in my scenario planning education almost every day I thought it might be appropriate to remind you of this scenario published by Peter Schwartz and Jay Ogilvy in their article Plotting Your Scenarios in the book Learning from the Future (eds Fahey and Randall). 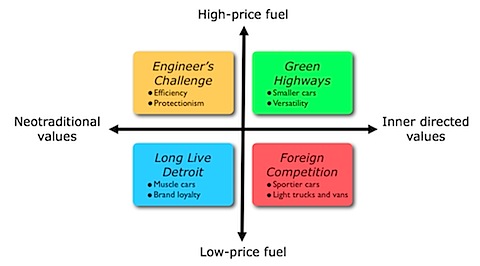 It is said to have been developed in the 80:s in order to understand the uncertainties of the future of the american automotive market.

Searching Google I found out that this particular scenario cross is also referred in at least two other books:

Since what these scenarios described was two major uncertainties in the automotive market the conclusion was that efficiency and size/design of cars really are important i e lower fuel consumtion and more van/hybrid cars.

This process started, but came to an abrupt halt when the birth of the SUVs tricked the american automotive industry into that fuel and size weren’t real issues. What was basically missed was that the relatively good economic era of the 1990s boosted a life style purchasing pattern that for some time supported large, safety focused cars signalling a active and individualistic life style. That basically made the automotive industry going back to sleep forgetting what they actually seemed to ahve realized during the short wake up periond in the 80:s

Just to some years later wake up to the bells of the real energy crisis boosted by a financial crisis and a global scale recession.

I don’t know, but the word culling comes to mind…