On October 11, 02011 Thomas L. Friedman, author of widely selling books like The Lexus and the Olive Tree

, The World Is Flat and Hot, Flat, and Crowded as well as a NY Times columnist wrote a massively referred and tweeted column by the name Something’s Happening Here, which he started off by:

When you see spontaneous social protests erupting from Tunisia to Tel Aviv to Wall Street, it’s clear that something is happening globally that needs defining. There are two unified theories out there that intrigue me. One says this is the start of The Great Disruption. The other says that this is all part of The Big Shift.  You decide.

So there you have it: Two master narratives” one threat-based, one opportunity-based, but both involving seismic changes. Gilding is actually an optimist at heart. He believes that while the Great Disruption is inevitable, humanity is best in a crisis, and, once it all hits, we will rise to the occasion and produce transformational economic and social change (using tools of the Big Shift). Hagel is also an optimist. He knows the Great Disruption may be barreling down on us, but he believes that the Big Shift has also created a world where more people than ever have the tools, talents and potential to head it off. My heart is with Hagel, but my head says that you ignore Gilding at your peril.

Since I have been following and been talking about the future based on the underlying driving forces that lead up to this development for many years now, I couldn’t agree more to about the relevance of these narratives. But I think Friedman makes a mistake when he thinks just one of these two narratives about “The Great Disruption ” and “The Big Shift” are right. To me, these two theories actually describe two driving forces that play out simultaneously, which both will have huge ramifications on our society. Because of this model I call our society which now lives through this the transition society.

This is a compressed version of a slide I usually show in order to talk about how these forces are related to each other. As you can see here I think of the impact as a transition phase where one s-curve shaped development is replaced, being succeeded or eventually melted together with another development in the form of an s-curve. As we know from ecological systems, the outcome from such a transition is highly uncertain, and I think we should think about our future in the same way. 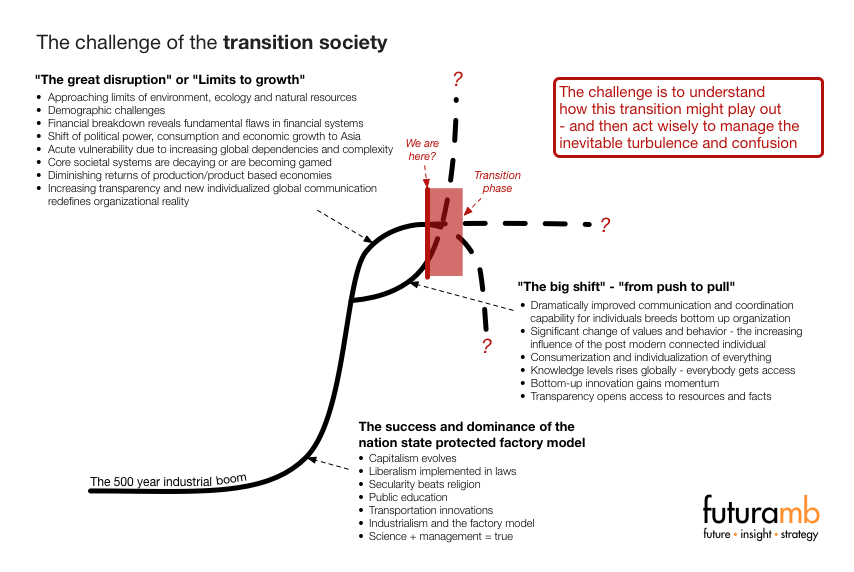 This way of visualizing the future is of course highly abstract and theoretical but is nevertheless one of the few ways I have found to visualize the complex development of what we see happening around us. One argument for this S-curve/transition model is that it would also explain the transients and rapid swings we see today and which is a normal effect in the observation of phase transitions in eg physics, chemistry, and biology.