What about the future of the automotive industry? It doesn’t look good from an American (or Swedish) horizon, but where is all this going and how are we going to transport ourselves tomorrow?? 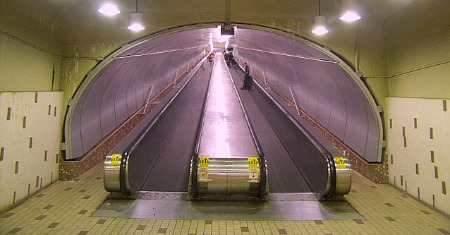 Yesterday I held a speech at a local conference of entrepreneurship. As usual I talked about scenario planning and it’s virtues of creating a better understanding of the business environment, especially when it comes to understanding the underlying driving forces shaping the environment as well as assessing the critical uncertainties of how these will play out.

I also met a former colleague from Volvo and we started to discuss the state of the automotive industry. Suddenly I found myself retelling some of the ideas about the future of the car industry and mobility I spoke about at Volvo almost 10 years ago. Thoughts I had a problem getting people to grasp then… but maybe something has happened since? These are a new remix version of what went on in our minds then, and what is occuring inside in my head these days.

Today’s car industry is since long stuck in a mature and until recently slowly, but now rapidly braking market. The key reason for this have been, and still is, the unwillingness/inability to reinvent the concept of the car to something else than a increasingly complex, functionality loaded, emotional, status-boosting and expensive entity.

A number of driving forces in the business environment coincide to create the business situation where this reinvention is absolutely necessary:

A certain indicator of this development is the continuous increase in the use of bicycles and small personal motorized vehicles (e g mopeds) in modern cities. The situation have since 10+ years become more and more critical so the problem isn’t new. What is starting to occur is that the automotive industry is running out of both buffered resources and there is still no signs of proactive ideas.

What we now can be almost certain of, judging from the period from the different crisis from 1972 until the present, is that the ideas and innovations with a potential to change the situation will not come from inside the automotive industry itself. But where will they come from?

Simpler functions are are on the rise, not increasingly complex services – In the area of Internet and Web 2.0 we seems to have found a really important insight, which is slowly finding its way to other areas. When decreasing the complexity in an offer, as well as the process paying for it, the potential for rapid success through a high market penetration seems much better. The important advantage is that you can still be rational and efficient on the inside without having to internalize the understanding of complex and continuously changing customer behavior. Reducing complexity in an offer means that there is a better chance of finding a more natural interface between customer logic and production logic. A really important achievement in an increasingly complex and transparent world. This means basically that instead of trying to increase the service content in order to increase the value of a service, many of the successful companies are actually doing the opposite and reducing the width of the service, but instead excel in providing a simplistic but high quality function with global reach.

The rise of low end and distributed innovation – Increasing abilities of innovation among the other 4 billion people is changing the focus of innovation from exclusive and advanced top end innovation, which describe the majority of development in the West, to inclusive low end innovation for the masses, which is what seems to emerge elsewhere. Companies are slowly starting to realize that in the low end of innovation lies both the future for the rest of the world, but also a pretty huge untapped market. One really interesting effect of this is that a lot of our advanced western innovations, which are adapted to our situation, will be re-innovated in other parts of the world and under completely different circumstances and cost pressure. And when people realize that great many of these new innovations solves basically the same problem as we have here, but to a fraction of the cost, we are going to import these in great quantities in about the same fashion we today import a lot of produced goods from the rest of the world.

We can talk about the last one in more general ways as the rise of mass-collaboration, mass-amateurization and mass-innovation as well, but for my purpose here this description level suits me.

Another development that could be mentioned here is the Open Source/Open Content/Open X development, but as I see it is just a way of organizing innovation which of course will have a huge impact on how the different innovations will be developed, but will make less of an impact on how the future of personal mobility will develop.

If we consider these driving forces as important, but yet uncertain in how the might impact the automotive industry, how will they play out. What might happen??

Scenario 1 – The car (industry) is slowing down – to crash

The legal system is reinforcing the inertia in the western traditional industrial mindset when it comes to change how we transport ourselves. In the rest of the world a vast palette of new low cost transport technologies are seeing the dawn of light. Many of them builds on the bicycle and different kinds of individual vehicles propelled by solar powered electricity. We in the west shows again that we are simply unable to adopt innovations coming from outside of our own ranks.

The automotive industry will continue it’s slide downward and will basically crash. Maybe some of the leftovers will be reconfigured to smaller companies selling their increasingly expensive cars in the rural and niche markets that will remain.

Scenario 2 – The low end reinvention of the car – “The car is dead! Long live the car!!”

In this scenario the car is reinvented through the innovation powers that rise among the other 4 billion. Instead of an expensive car that is intelligent and safe, the new car is small and comes in many (but smaller) varieties. Some of them will more resemble a concealed moped with place for one person, while others will have room for both a family and a few bags. The main point is that these vehicles are both light, simple and cheap to buy and drive. They will most likely also be very rugged to survive in a crowded city as well as adapted to small parking areas by being foldable in different ways.

The automotive industry at last realize that if the want to survive in the market of mobility, the will have to enter the new emerging market by buying moped manufacturers and invest in different innovation models and market in the developing world. It means that they will radically widen their view of what a vehicle is and by using what is left of their financial muscle they will have maybe have enough resources to invest in the development of these new cars. It will be bad, but they will at least have a plan and an industry to compete in!

In this world the concept of mobility is changed from being based on vehicles, on to other ways of moving people and goods. By taking the perspective of how functions (rather than products or services) can solve the problem of urban and trans-urban mobility in more efficient ways, the breakthrough comes from a completely other direction. Instead a vast numbers of new public transportation innovations see the light of day. Old science fiction ideas like moving sidewalks and different kinds of light and continuous train-like systems are being experimented with in different places.

Suddenly people understand that one of the major competitors to today’s car manufacturers are companies like Otis, who have the advantage that they understand how to transport people both horizontally and vertically. By getting rid of the mental connection between mobility and owning/driving a vehicle and regard mobility as a function new possibilities of transportation is opened up.

Traditional car manufacturers realize that they have to engage in the development of transportation systems rather than vehicles. Cars will not disappear but will have a smaller market share and will be thought of as an urban complement to the integrated city system.